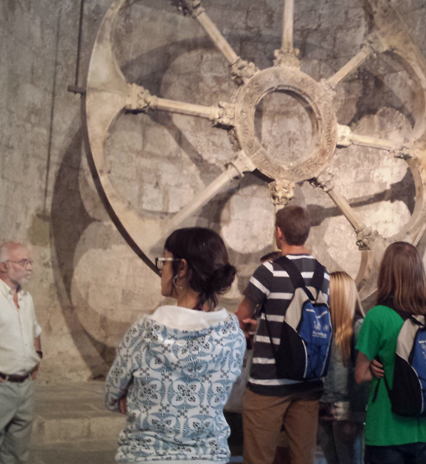 The ICPRC has participated in the course “Bojos per l’Arqueologia” (Crazy for Archeology).Part of the course was taught in Girona, where the ICRPC (a CERCA centre attached to the University of Girona) held a total of six sessions. During the sessions, the actions that need to be carried out after the excavation of an archeological site were presented and communicated to the students. The course was initially held in Tarragonaat the Catalan Institute of Classical Archeology (ICAC)and the Catalan Institute of Human Paleoecology and Social Evolution (IPHES).

The sessions in Girona started in the heart of the Barri Vellneighbourhood, where Joaquim Nadal i Farreras, who is the ICRPC’sdirector and a professor at the University of Girona,welcomed students and presented the work carried out by the Institute, with a particular focus on the importance of heritagization and the uses of heritage. From the steps of the Cathedral of Girona as a starting point, the group visited the Monastery of Sant Pere de Galligants, which houses the Archaeology Museum of Catalonia-Girona (MAC). Then, in the magnificent Pia Almoina building, Antoni Rojas, an archeologist and head of the Studies and Analysis Unitat the ICRPC,gave a session on the “museumization” of archeological sites.

The students visited the Iberian settlement of Sant Sebastià de la Guarda for a session on archeological heritage activities. In another session, Antoni Rojas described the various roles of technology in the world of archeology, as well as the actions that should be carried out oncethe excavation of a site has been completed.

The next session was led by Gustau Vivar, the Director of the Underwater Archeology Centre of Catalonia (CASC), who introduced students to the passionate world of underwater archeology research. Students visited the centre and found out about heritage that has ended up under the sea.

Another activity was carried out at the Greco-Roman site of Emporion (L’Escala, Alt Empordà). Joaquim Tremoleda, archeologist and curator of the Archaeology Museum of Catalonia-Empúries (MAC), demonstrated aspects of the use of the imageof archeology in different contexts.

With a specific focus on tourism, Sílvia Aulet, lecturer at the University of Girona, presented a study undertaken by the Multidisciplinary Laboratory of Research in Tourism (LMRT) on the behaviour of tourists at a cultural destination, and carried out an enjoyable group activity in the streets of Girona.

Archeology as a scientific activity

Archeology is a scientific discipline that is devoted to the study of human societies through the recovery and analysis of the cultural material that they generated. Various multidisciplinary processes are involved inthis field, including research, interpretation and dissemination of the knowledge that is gained. Thecourse enabled students to come into contact with experienced archeologists, who showed them their daily work and shared their knowledge about the passionate world of archeology.

The “Crazy for Archeology” activity was focused on strengthening students’ knowledge of prehistory, classical archeology and cultural heritage, in accordance with the latest research on the discipline. The course gave upper secondary school students an idea of the world of university research in our immediate environment, and contributed to encouraging careers in science, in the broadest sense. The search for a career and academic excellence were one of the main objectives of the project.

The course brought students into contact with science in an educational way, in order to promote better social recognition of the discipline and encourage scientific careers. Therefore, thecourse boosted science and humanities careers in the first stages of higher education, and contributed to the knowledge society, as it could lead to thecomprehensive training of future research and humanities staff. It was part of the 2013 call Bojos per la Ciència(Crazy for Science), which was sponsored by the Fundació Catalunya La Pedrera.

The full programme can be consulted at http://bojosperlarqueologia.icac.cat/